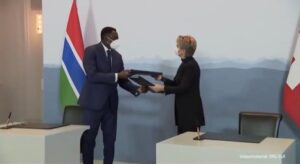 Bern, 12.01.2021 (Switzerland). A delegation from the Gambian government negotiated an agreement between Switzerland and The Gambia to facilitate the deportation of its « surviving » nationals in Switzerland.

Well, when we talk about « survivors », there is a reason!

Cagliari, 15.02.2021 (Italy). 13 Gambian nationals are arrested as part of an anti-drug operation by the Italian police, in collaboration with the Gambian police. Subsequently, the eviction procedures will be initiated in due form, through to this new partnership.

Preparation of agreements, police operations abroad, certainly substantial budgets which could be demanded from the international community to develop this country where the infrastructure is practically absent.

Let’s take a step back …

In 1994, Yaya Jammeh took power through a coup.
The economy of the country has been falling for several reasons, while the international community does not move a finger to restore democracy in the smallest country in West Africa, for lack of economic stakes.

The dictatorship of Mr. Jammeh pushes, therefore, thousands of young people to leave the country, in search of  greener pasture, of course, and the « back way » opens. 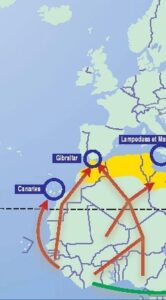 Young Gambians then embark on boats in bad conditions, through imprecise localities of the Smiling Coast or Senegal, bound for the Canary Islands (Spanish territory) by supplying the new slave trade.
Capsizing, loss of roads, thousands of deaths that nobody talks about the real quantity.
For almost 20 years, other paths of despair opened up through Niger, the Libyan desert and the Mediterranean sea.
And the dead, speechless, faceless, pile up.

But if we want to summarize, here are the salient points of this tragedy which is consumed in an indecent silence.
– a young person who is forced to leave his country and his environment;
– a family that commits, even by selling a property, to finance this journey of death;
– a person forced to go through the desert, the sea and to face the smugglers;
– a society which guarantees the existence of this new slave trade;
– uncertainty of obtaining legal status once in Europe.

A country that lives thanks to the remittances of its nationals

At least irresponsible behavior on the part of a government, that after this long dictatorship, should consider the reconstruction of the country, rather than negotiating agreements so unfavorable for these citizens.
This same government which should proclaim aloud the right to asylum for Gambians abroad and, above all, for those who have taken this terrible path of the new slave trade.
However, the number of Gambian refugees in Europe has seen a worrying drop since 2016.

A government that has limited resources, but which should commit to raising the awareness of its population to better invest the capital coming from families abroad.

A government that does not choose transparency with delegations of Gambian nationals who, in Switzerland itself, go to meet them 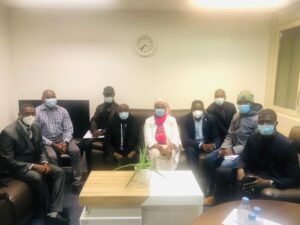 and to whom we outright deny the existence of these negotiation procedures, as in the case of our colleagues from The Gambia Swiss Congress received by Mrs. Isatou Touray (vice-president) in person.

A sad question that arose spontaneously:

« How much is the life of a Gambian national worth to his government? »